#1
With the first round of the playoffs over, goaltending has once again been the most important factor in determining who goes on and who goes golfing. Let’s take an objective look at the top 5 starting goaltenders and I will attempt to rank them based on their career statistics and current play, while also highlighting some of the gear they wear.


Hiller has always been a good goaltender whom, despite posting a very solid .917 SV% in 350 starts, has managed to fly under the radar. Hiller has been dominant in his limited postseason experience, posting a .932 SV% in 32 games played. As a goalie who spends 99% of the game in the butterfly position, every team should follow the lame advice that Eddy Olczyk spews ad nauseam, and “elevate the puck”!

Dubnyk had one of the best regular seasons in recent memory, and was excellent in the final two games of the St. Louis series. However, it seems only a matter of time before the career .914 SV% catches up to him. While he may not revert back to that near league average level now that he has changed his game up, it’s still hard to imagine him becoming the next Dominik Hasek. That being said, he takes the 5th spot based on how ridiculously hot he has been this year.

Gear: Doobie uses the Supreme TotalOne NXG gear that is designed for maximum coverage, making sure to take full advantage of his massive 6 foot 5 frame. Like some of the other Bauer goalies, he has switched over to the Reactor 9000 stick, as its foam core construction has superior vibration dampening and feel. Rabble rabble rabble, glove hand sucks, rabble rabble rabble. The underrated Crawford has ignored the constant attacks on his abilities and has managed to post a solid career .917 SV% in both the regular season and postseason. During the Stanley Cup run in 2013 he posted a .932 SV%, and was just as deserving of the Conn Smythe as Patrick Kane, if not more so. Great team behind him not withstanding, those are very good numbers, and worthy of the number 4 spot.

Gear: Crawford employs more of a traditional butterfly style with an emphasis on strong deflections. Kicking rebounds away from the net and to the boards is tantamount to his success, which is why he has opted for the Reebok Premier line that has a stiffer construction and XLT foam that helps create more powerful rebounds. 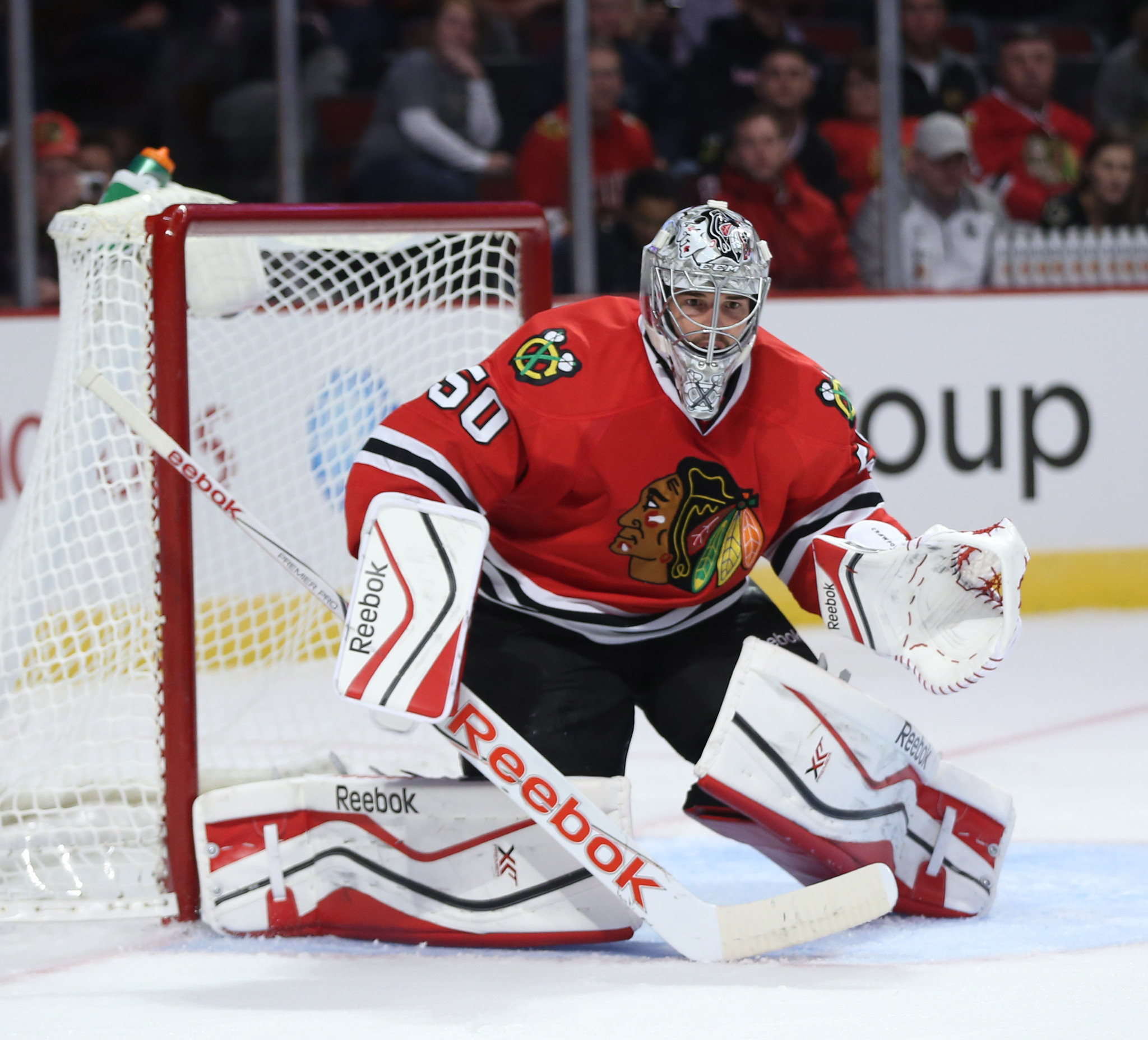 Quietly posting a great .921 SV% in the regular season, even with Alex “Glides on Defense” Ovechkin providing the back-checking, Holtby has been a revelation for the Caps. Much like Jonas Hiller, Holtby has had limited but very successful postseason experience. His phenomenal .933 SV% in 27 games and high level of potential is enough to propel him into the 3rd spot.

Gear: Holtby uses the new Extreme Flex II line that has helped elevate the game of numerous goaltenders throughout the league. The advanced strapping system and torsional flex boot help make transitioning in and out of the butterfly as efficient as ever. Price has been the best goalie over the past year and a half, but sits at the second spot due to his unimpressive playoff numbers. Sporting an excellent career .919 SV% for the regular season, he has been a bit of a disappointment when April hits. His pedestrian .913 SV% in 48 games played during the postseason is a large enough sample size to show that he has the most to prove of any goaltender this year. So far, he is well on his way to earning the truly elite status that he has always been capable of achieving. If he brings the cup to Montreal, we may be calling him Prime Minister Carey Price one day.

Gear: Decked out in CCM gear, some of which he helped design, Carey has been nearly unstoppable. The new chest protector and pads have made him look as big and smooth as ever while still giving him those perfect mechanics that he is know for.

Over the past decade, NHL goaltending has had a shadow cast over it by one man… and four syllables… Hen-Rik Lund-Qvist. With an attitude that says, “Who cares? It’s only goaltending”, King Henrik has been the “model” of consistency. Making quick work of Pittsburgh, he had the Penguins exclaiming, “That Henrik, he’s so hot right now”. With a fantastic career .921 SV% in the regular season and .923 SV% in 92 games played during the playoffs, Lundqvist has proven he can perform at a high level time and time again. The only thing that has eluded him is a Stanley Cup championship, though not from lack of trying.

Gear: Bauer’s go to guy, Henrik uses the unreleased OD1N leg pads with a TotalOne NXG skin. The Profile 961, which is the NHL’s most popular mask, ensures he can continue his modeling career once he has hung up the pads.

Overall Gear Break Down of the top 5 goalies: